Lore or inspiration…
Or just another Halloween story...

The Scene: A bar outside the Hollywood Palladium mid July, 1998. Sad Girl had just stumbled out from The Bauhaus concert with “Bela Lugosi's Dead” still ringing in her ears.

She was parched from a night of dancing, and needed another drink ASAP. She wandered into the nearest bar, and then set her eyes on him. Tall, dark, and handsome, just like in those romance books her mom was always reading.

He bought her a drink, then one became 2, became 5... At bar closing they both left and started to make plans to meet again... Out of nowhere some thugs started to approach… The last thing she saw was a blink of a car light reflected in his eyes... They both ran out in the street only to be hit by an oncoming car.

Next thing she knows, she is back at the Palladium at the Bauhaus concert. However this time, she had this feeling she had been there before. 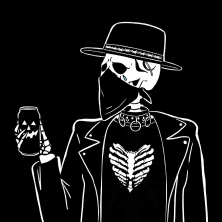 After the concert, she went into the same bar, but something was a bit off. What did she order the last time when she met her star crossed lover… Was it a whiskey, a red strawberry cocktail, or maybe a lemonade?

She tried her luck with the red strawberry cocktail, but that wasn’t it.

Maybe it wasn’t the cocktail. Maybe it was her hair? She tried fringe, then a ponytail, then a curly hair bun.

All the while her star crossed lover was in the same purgatory. 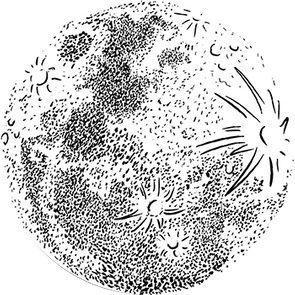 Night after night after night this continues. One day the stars will align, and the Sad Girl and the Skeletongue will get their combinations right on the same night, and their destinies will forever be sealed together. 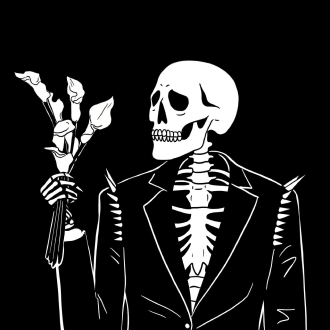 And be ready for an upcoming and completely new Sad Cats collection! As a teaser – you met some of them as SG companions.
Yes-yes, mr. Purr-Purr, God of Mouses… 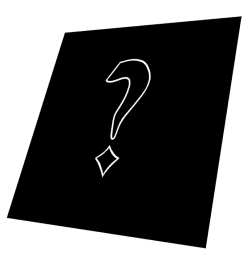 Those who will collect all-three — Sad Girl, Skeletongue and Sad Cat will have an opportunity to create a SUPER-NFT — it will look like a poster-style bar story with all the heroes!